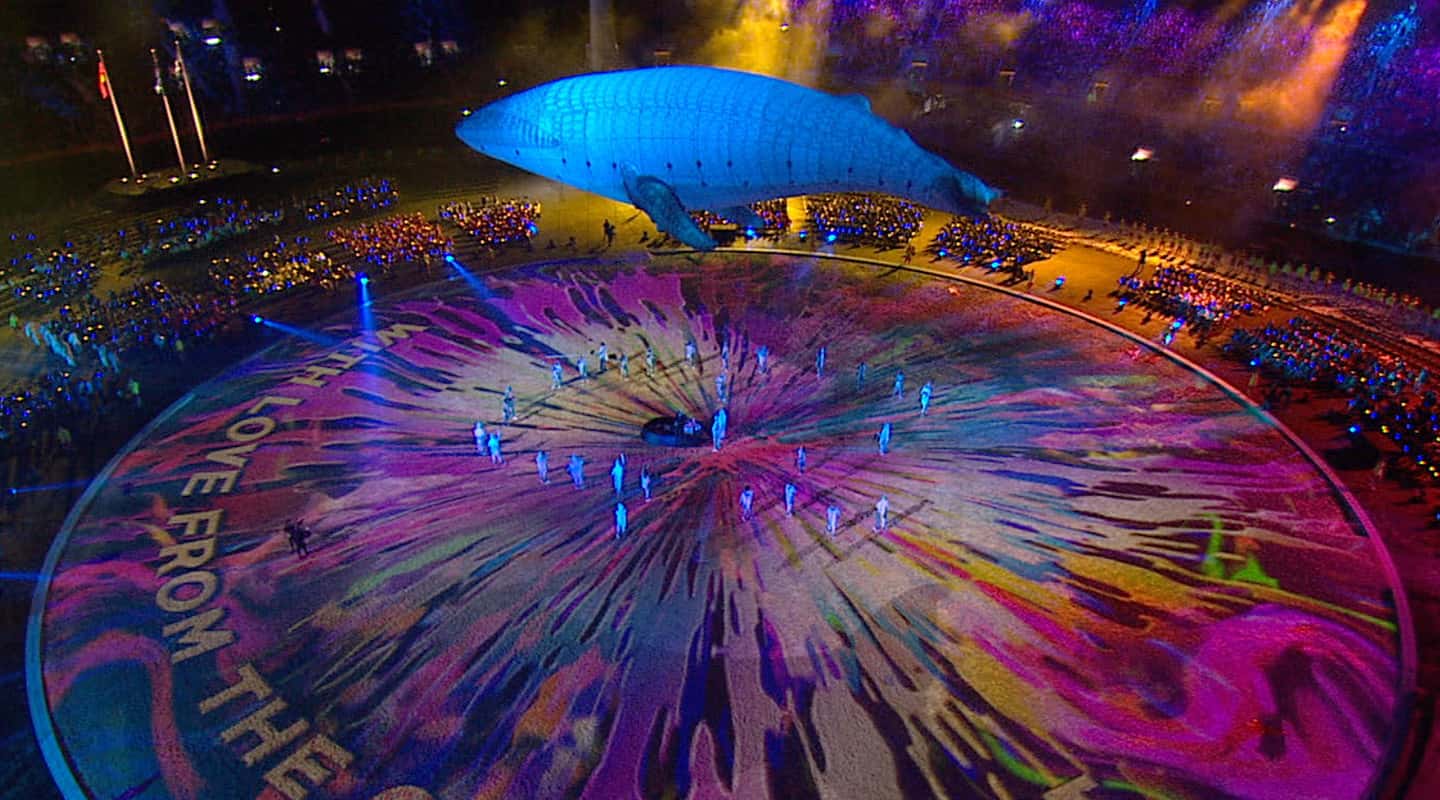 Running a show can be nerve-wracking for technical production teams at the best of times but no more so than when you are going live to the whole world. The 2018 Commonwealth Games Opening and Closing ceremonies at Carrara Stadium on the Gold Coast was yet another moment to shine in front of the planet for Sydney’s highly experienced The Electric Canvas (TEC).

First off, the main brief for the opening ceremony called for projection over a 3200sqm circle on the stadium’s field of play. The secondary component of this opening was projecting onto the side of a 30m-long inflatable version of Migaloo, the unique white humpback whale of some fame.

Eleven days later, the closing ceremony featured four individual stages requiring projection. The smart move here was re-using all the same projectors still in place from the opening, no easy feat given some extreme access issues.

TEC is well versed in large-scale stadium projection. Admittedly each is unique, but TEC found this instance a particular head scratcher. Two main obstacles needed overcoming. Firstly, the stadium topped out at only 12-14 metres above the field of play, providing very shallow angles towards the next problem – a 64m-diameter circle of sand serving as the main stage – great for a day at the beach but a painfully uneven surface for projection. The nap and undulations of the sand would only be amplified by the low angles and produce unacceptable shadows and smeared pixels.

TEC’s managing director and ceremonies director of projection, Peter Milne, craned his neck to the top of Carrara’s lighting towers and saw a 70m-high position for the main projectors. More efficient coverage would also be enhanced by the lack of shadows cast on the projection by props and performers. Projecting from here would overcome the angle problem but take a higher degree of engineering and planning than just hanging off the stadium roof.

The AVIA judges were impressed with the creative solution to the well-known problem of covering the main field of play with minimal distortion and shadowing from the performers and participants. They also appreciated the clever re-tasking of those projectors for the different stage configuration of the closing ceremony. The panel recognises that the projection crew were probably less impressed with the idea behind these solutions when faced with the 70m ladder journeys for commissioning, alignment and maintenance of the projectors.

The biggest hurdle was getting 20 x Christie 2K30 Boxer projectors into these elevated structures safely and securely. Without accurate CAD plans or engineering details available on the towers, TEC surveyed the entire site by hand with a tape measure and paper, determining the only access to the available decks of the tower heads was up with a 100-tonne crane and in through the side. They then got to work constructing custom weatherproof enclosures for the big Christie’s to fly into the two lower decks of the towers.

Strict safety protocols were employed and adhered to by the team of 10 specialist projection technicians. Several times during setup, fierce wind and rain halted any crane movements and some of the team skipped to content review before the gear was all in place – a good example of agile scheduling. The rest of them kept their legs flexible by repeatedly climbing up and down the internal tower stairs. Peter Milne estimates that their troupe had “climbed to the top of Mt Fuji by the end of the project – it was hard on crew but a good decision for vision.”

TEC also added four Christie Boxer 4K30 projectors to the underside of the seating balconies. These shone on the side of the great white whale, cleverly keeping the projected element within the sweet spot and using lighting to cover the edges. Careful coordination with the Stage Manager kept it all trim and well positioned.

The one-go-only nature of such an event demands bulletproof system design and multiple redundancy plans. TEC used a Modulo Kinetic media system to manage and deliver content to the projectors, stadium screens and broadcast feeds. The system had 100% hot backup to the projectors and the whole distribution design incorporated redundant parallel links without a matrix in sight. Single points of failure in mission critical situations like this are best avoided, so every effort was made to eliminate the potential of any individual component bringing the whole show down.

TEC also developed custom software to monitor and control every aspect of each individual projector, including previewing the input signal arriving live. To ensure output was correct, there were cameras next to each projector showing a live feed back to the control room – keeping all the bases covered.

The very capable and flexible Modulo Kinetic system handled the blending of all those projectors to line up nicely and provide a seamless image on the circle and performers. TEC has a long and productive association with Modulo – both parties working together to improve the Modulo products from TEC feedback in the field. Knowing and trusting that a crucial system is robust, certainly helps with TD peace of mind.

Less productive was the projection budget, which was on the decline during the event lead up. Initially, projection brightness was designed at 300 lux, a happy level for broadcast. With the dollar squeeze on from event organisers, the projection design was revised to a bare minimum of 200 lux. This provided its own challenge for the lighting and broadcast crews but everyone worked together to get the best possible outcome. Peter has worked with the TV and Lighting Directors before and they all know that “if one has a bad show, everyone does”. Good relationships with the content providers helped keep it smooth too. Unlike some of the Games events, production is a team sport and true professionals know this well.

TEC had done a lot of investigation and prep work while tendering but still ended up contending with a compressed timeframe to get the projectors in and going. As Carrara was still a building site, more challenges came in the form of access and inductions, duly incorporated into the TEC plan.

Faced with a now tight production budget, TEC reset some of the tower mounted projectors for the Closing ceremony. To shoot towards the four stage areas, some required a lens swap and re-alignment. Still contending with cramped access within the tower heads, TEC crew crawled on their bellies underneath the projectors to change the carefully tethered lenses. A couple of original lenses were left in place to provide alignment marks and reference points on the field of play. This changeover occurred at strategic intervals during the 10 days of the Games – some pre-sport, some during sport and some after the last field event before the finale.

Over a billion viewers tuned in to these ceremonies. Regardless of any issues outside of their control, TEC delivered seamless projection systems and content management in a very complex environment. TEC planned well, designed astutely, stayed flexible and kept their heads in a pressure cooker environment. Innovative solutions for challenging briefs – specialties for The Electric Canvas.

One For The Workers

FACEIT And Panasonic Ensure It’s Game On For Esports Tournament

All the Details on ISE Digital