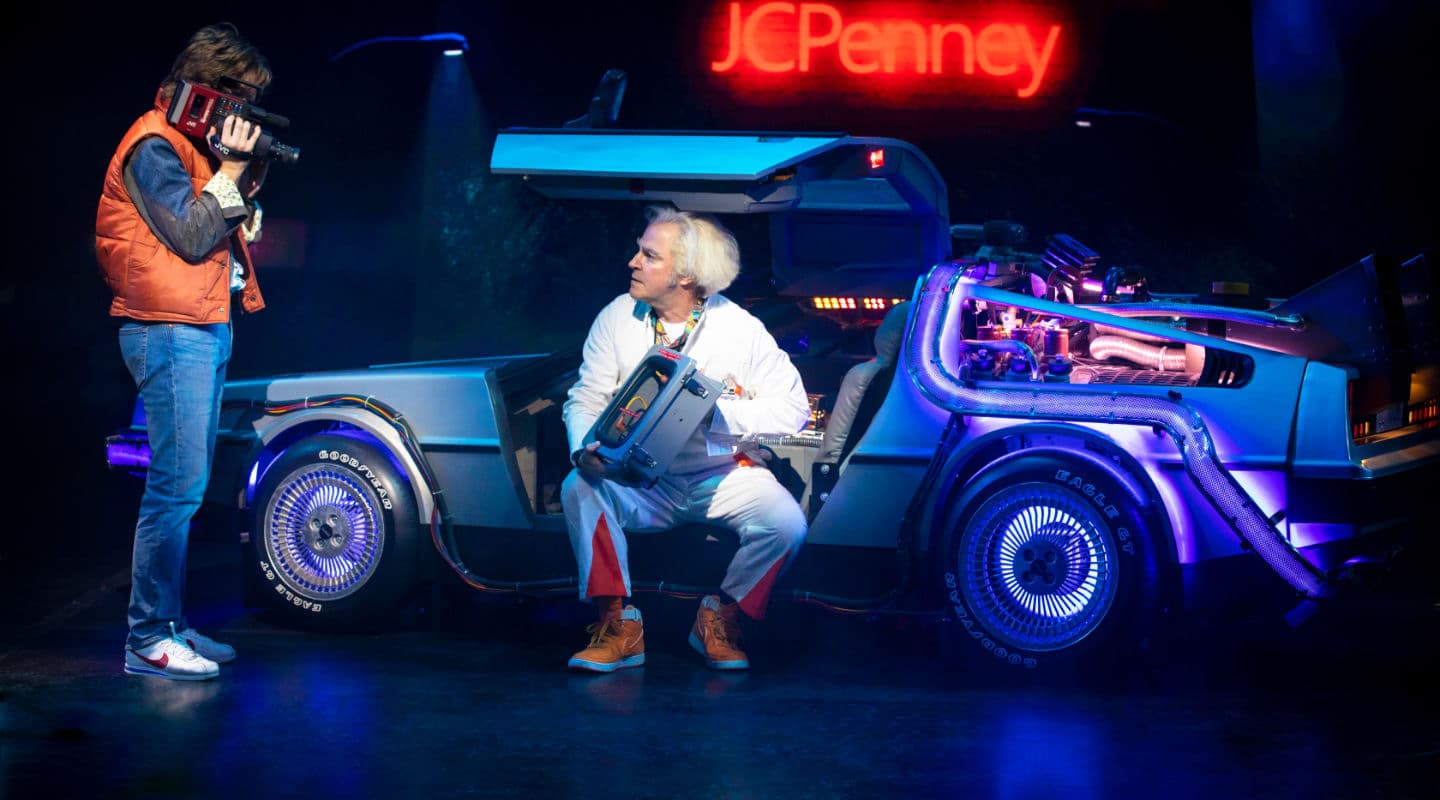 d&b goes Back To The Future with KSL. — AV.technology

Recreating a film for the stage ain’t easy. Sound designer Gareth Owen and d&b bring back the 80s classic in all it’s time-bending glory.

Back To The Future (BTTF), the cult film that shaped a generation has been adapted for the stage and arrived in the West End, running at the Adelphi Theatre in London until July 2022. The production entertains fans with a dynamic show delivering a visual and sonic spectacle on an unseen before scale, featuring some of the famous movie moments and of course the iconic DeLorean.

Multiple Olivier Award winning sound designer Gareth Owen relied on his knowledge of, and trust in the d&b product portfolio to select the right audio solutio­­n to do justice to this much-loved story.

A musical as ferocious as this needed powerful audio that would do justice to the original songs of the 1985 film score such as ‘The Power of Love’ and ‘Johnny B. Goode’, as well as new music by composers Alan Silvestri and Glen Ballard, while remaining clear and unobtrusive to deliver some of the more emotional moments.

“Back to the Future is one of the most dynamic shows I have done in a long time,” Owen states. “The music jumps from 50s Jazz to Rock ‘n’ Roll to sweeping orchestral episodes to really quiet and emotional moments – so I needed a system that would deliver enough power as well as clarity.”

For musical supervisor Nick Finlow the challenge for the sound design lies in tying together the visual and the audio, without letting one outshine the other. “BTTF is a huge show in so many ways. It is visually and technically stunning, has a big cast, a large pit orchestra supplemented by programming on track, and is playing to audiences in a large theatre so the sound design of the show not only has to match the rather epic nature of what the audience are seeing, but it also must support the score, which ranges from big orchestral moments to full company production numbers and also includes much more intimate moments.”

A tall order, trying to fulfil the above. The KSL system chosen was launched in 2018 and Gareth Owen was the first sound designer to ever specify it in the West End for hit musical & Juliet. For Owen it was clear immediately that the full broadband directivity control would be highly effective in a theatre environment, where line arrays are often flown extremely close to the proscenium walls due to sightlines and spacial restrictions. “d&b’s SL-Series loudspeakers guarantee optimal audience coverage while keeping energy off the main stage thanks to the active speaker design, making for a quieter stage, keeping the audio clear, all without a drop in level for the audience,” he elaborates.

For BTTF Owen decided to go a step further and utilise KSL arrays for the balcony tier as well as for the main proscenium system. An unconventional choice perhaps, but one that paid off. “This was the first time I put KSL speakers in the gallery and it proved really effective. It’s the most reverberant space in the theatre as its closest to the often heavily adorned ceiling. Using a highly directional box up there meant exciting the room much less, making for better intelligibility and creating a better audience experience in these, often lower priced seats.”

No BTTF adaptation would be plausible without the famous DeLorean. The creative team behind the musical have managed to create a technical masterpiece that is on par with the ‘real-deal’. The car is loaded to the hilt with stage tech – including d&b amplifiers and loudspeakers – making it move, speak, flash and huff and puff – all with room for the actors to spare.

The successful theatrical delivery of the DeLorean is a personal highlight for Owen. For the audio part of the car, d&b’s longer established speaker series’ were the best fit for the job. “The DeLorean in the show is an absolute marvel of theatre technology and stage design. It’s packed full of lights, smoke machines, moving mechanisms and sound. All of which had to fit into a really tight space. We managed to achieve incredible sound effects with two Y7P’s and two E6’s – I didn’t think they’d do it, but they delivered the necessary output. It’s incredible.”

Thanks to the broad d&b product range, Owen’s expertise – with support from d&b partner Orbital Sound who supplied the kit – all the different needs of this show were catered to, which made for a smooth collaboration between the audio department and the rest of the production team, despite having to ‘wrestle’ for room in the famous car…

Finlow is equally delighted with the results. “What’s so important for BTTF is that the sound design is malleable – helping us portray the most dramatic moments but also the most intimate. The sound design certainly delivers on that front and collaborating with Gareth in bringing the musical vision to life was very effective.”

For Chris Headlam, MD at Orbital, working on this show was a great way to “shake off the Covid blues”, commenting that “BTTF was always going to be an interesting journey. With the reputation of one of the biggest and strongest film titles of all time at stake, audience expectations were extremely high for this one. It’s not easy to transcribe film to the live stage, but in this case, it’s been a great success. Everyone who has been lucky enough to see the show and hear the show agrees that this is an almighty production.”

All Together Now: DSP Goes Net-Centric

AES: The Next Standard