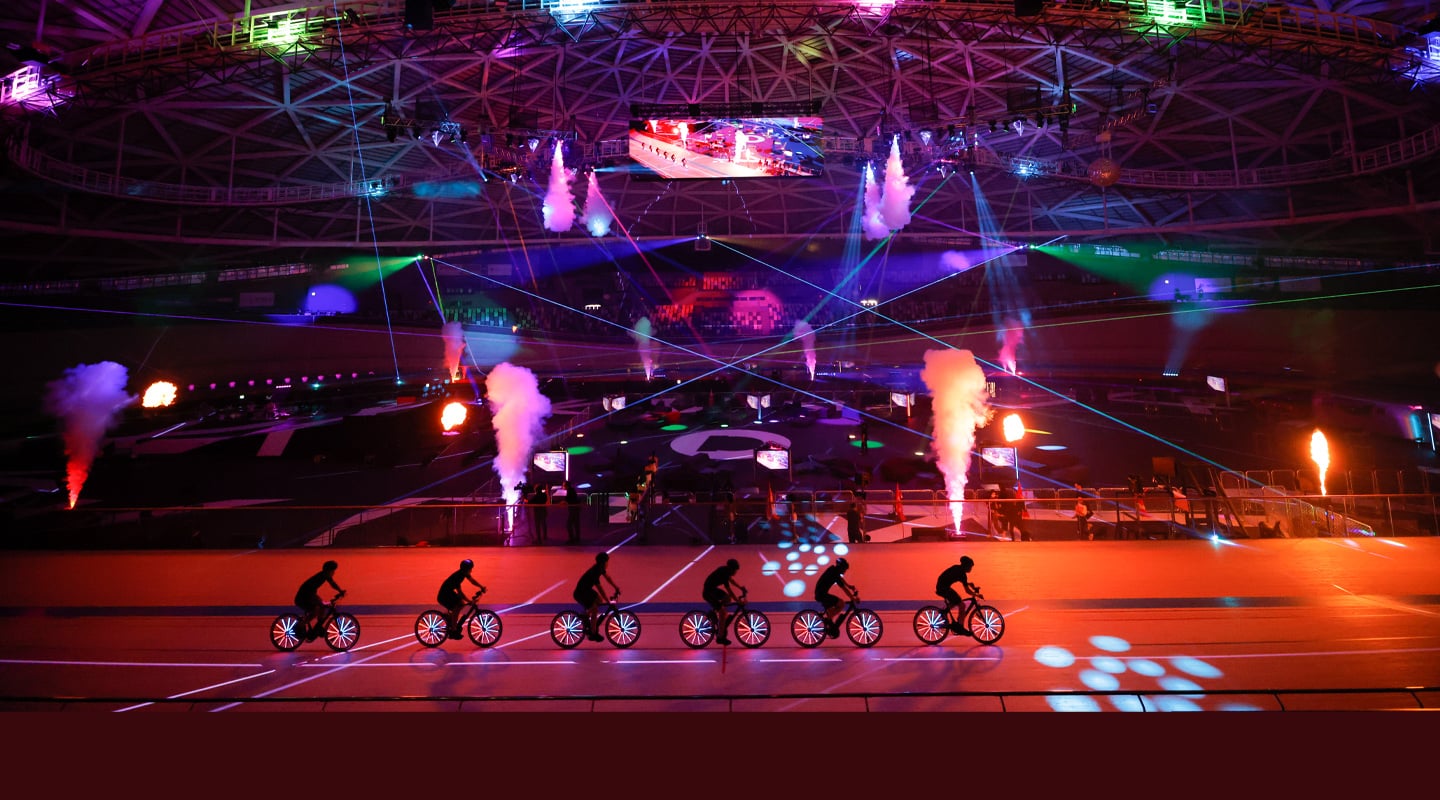 Newly built on the site of the former Chiba Velodrome, the Tipstar Dome is one of the few velodromes in Japan to possess an international standard, 250-metre wooden track. The venue hosted the first annual PIST6 Championship, an event that combines art, food, and fashion while pitting top cyclists from Japan and abroad against each other in a competition to determine the world’s fastest cyclists. A hybrid sport-and-entertainment event sets the bar high, and Japan’s One Love Project was brought in to provide a show that would wow spectators.

No stranger to the challenge, One Love Project has produced interval shows for the Chiba Jets Funabashi professional basketball team and Japan’s Nike Zoom Speed Race for years. One Love Project Director Mr. Jun’ichiro Takanashi created audio, visual, and lighting content to be played during race intervals and lead-ups to enhance the audience experience for the unique sporting event. Mr. Takanashi partnered with sound system designer and engineer Mr. Kotaro Matsuura of Wiz Inc. to design an arena sound system that would ensure dynamic music and reinforce intelligibility to keep fans engaged throughout the event.

“The most vital aspect for any One Love Project production is to have a system with a high degree of flexibility, as we often perform a variety of music genres,” says Mr. Takanashi. “For the PIST6 launch event, a dynamic selection of originally produced, energetic ‘street music’ was part of the brief. I needed the power of a system with a strong low-end that also provides excellent vocal clarity for spectators in the velodrome.”

Mr. Matsuura of Wiz Inc. explains further, “We needed to create a system that would clearly communicate the results of the sporting events, but would also be lively and dynamic, with sufficient SPL for the music content. Our goal was to provide an environment where conversations could be held normally, even when the sound system would be pushed to high sound volumes. I felt that the power of an L-Acoustics system with low-end supplied by KS21 subwoofers would match Mr. Takanashi’s sound production sensibilities, so I arranged a demo of an L-Acoustics system for him.”

“The L-Acoustics system ticked all the boxes of my production pre-requisites,” says Mr. Takanashi. “It was well-rounded, and in terms of SPL, it could accommodate this arena’s size. I was sure that it would be able to deliver high-quality performance.”

With low trim height and strict weight restrictions at the venue, the duo chose an A15 system to provide optimal coverage and power with a lower box count. Panflex adjustable horizontal directivity helped reduce reflections and achieve consistent sound coverage for up to 2,000 spectators in the arena.

The event system consisted of four arrays of four L-Acoustics A15 Focus flown alongside four KS21 subwoofers in a cardioid configuration which supplied low-end. Two of these array and subwoofer groups faced each of the longer sides of the oval-shaped velodrome. An array of four A15 Focus flown in the centre on each side ensured that the middle columns of spectators in both wide stands received ample coverage. Eight LA12X amplified controllers drove the system.

At the centre, sofas were reserved for lucky spectators to enjoy the event and watch cyclists race around them on the track. Four pole mounted A10 Focus atop four KS21 subwoofers and six X8 coaxial boxes on floor stands delivered coverage to this centre lounging area. Further out, around a food truck, a pair of L-Acoustics X8 enclosures were mounted on a pair of SB15m subwoofers. Five LA4X amplified controllers drove the sofa-seating area and food truck sound systems.

Mr. Takanashi was pleased with the A Series performance. “A Series made it easy for me to express myself through my production. It responded smoothly between the quieter moments of sound effects as well as the louder, more energetic musical moments. I was thrilled that the system provided sufficient power with excellent quality throughout the arena. Precisely what a cutting-edge and entertaining sporting event like this requires.”

Only the Best for The Continental Cocktail Bar

A Game Changer For Golf Simulation